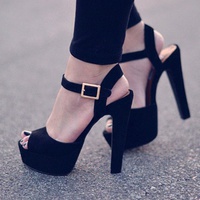 For thousands of years, people have wanted to be taller than they actually are, and what shoe achieves this better than platform heels? It has not ways been about fashion. Platform heels assisted royals in dodging medieval muck, gave Greek thespians a much-needed boost on stage, and were even outlawed by parliament in 1670. Patterns became more and more elaborate, with modern-day style being attributed to Salvatore Ferragamo’s cute rainbow-colored heel in the 30s. 70s disco gave sparkle to the style (complete with live aquariums), whilst a style popularized by the Spice Girls in the 90s was slightly more grunge. The platform of five years ago was a cute, summer alternative. But today, the platform pump is highly coveted, whether it is purple and gold, or complete with an ankle strap.